Service Through the Storm at Veranda Club

“A Smooth Sea Never Made A Skilled Sailor”

Hurricane Ian was a large and devastating category-four hurricane that moved through the Caribbean and the southeastern portion of the United States, damaging parts of Cuba, Florida, and South Carolina. Many of our communities fell within the range of the storm and our top priority was the safety and well-being of each of our residents. We had no way of knowing what would come from the storm, but we were grateful to see the beauty and resilience that came from our community.

I want to compliment and recognize the exceptional leadership and teamwork demonstrated at Discovery Commons Cypress Point, Fort Myers, FL, before, during, and after Hurricane Ian. I realize by contacting you that I am jumping over several organizational layers, but I think this unfiltered feedback from the “front lines” is worthy of your attention. My mother-in-law has been a resident of this community for seven months. I visit her almost daily, so my observations are firsthand.

The community started their pre-storm planning and preparations early and had their resources in place days before the hurricane struck. All of the directors and many of the team members stayed at the facility throughout the storm. They all pitched in to help when and where it was needed: serving meals, transporting and assisting residents, cleaning, and many other necessary actions. The communications to the residents and their families were outstanding. Everyone was kept informed of what to expect with timely updates throughout the whole storm event. When the main electrical power was lost, the backup power performed as advertised. When the community lost water, they had adequate supplies of water to meet their needs. The building itself proved to be an excellent shelter. Team members were calm, efficient, and competent, reassuring the residents of their safety, security, and medical attention. As electrical power and water were restored, and the storm finally passed, the community smoothly returned to normal operations as soon as possible.

I saw the directors and their team members tirelessly and selflessly performing as a highly effective team to meet the many challenges this storm presented to a senior living community with many residents who had never experienced a hurricane before, a stressful situation for many, including my mother-in-law. The team members reflect the exceptional leadership of their Executive Director, Donna Holden, and the other directors: Michele Howard, Nicole Ippolito, Anita Reinhart, Robert Bruno, and Donnie Smith. During adversity, the best or the worst of people is often revealed. This community’s leaders showed their very best. Team members were well prepared and inspired to serve and perform at a very high level — 5 Stars from top to bottom — a case study of “How to Do It Right.”

With deep appreciation and thanks for the Discovery Senior Living Organization and the entire leadership team and team members of Discovery Commons Cypress Point, Fort Myers, FL,

Hear our heartfelt ‘Thank Yous’ directly from our residents and their family members:

Thank you so much. I can’t tell you how much your three daily updates mean to us. We are watching the news and when I think I can’t stand it a moment longer, I get an encouraging and positive update from you. I knew I made the right decision but you and your team being there, when I am sure you are needed at your own home, tells me how much you truly care. You don’t just say you care; you prove you care every day especially during this difficult time.

I want to thank you, the Leadership Team and staff for the leadership, communication and performance during hurricane Ian. We understand what hardships and concerns each of you may have had by being here and not with your families and possessions. We’re sure it wasn’t easy. The commitment, long hours and hard work involved were truly appreciated. From a former naval officer – BRAVO ZULU – (translated – WELL DONE).

We are so fortunate to have you all caring for our parents. We can’t begin to thank you all for your own personal sacrifices during these challenging times. Your dedication to our parents is beautiful!

Being 800 miles away makes it a bit challenging to know how things are going there. I also wanted to say thank you, to all of you, for staying overnight. My family appreciates all of you for everything you do and each of you play a critical role. It’s been a little over two years that my parents have been at Aston gardens and I am continually reminded that they are receiving the best care possible.

Stories from the Storm: 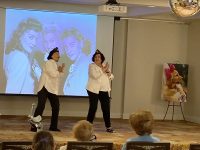 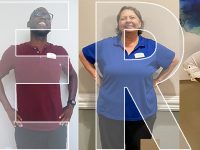 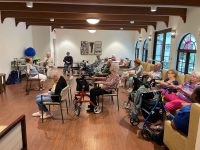 Get Peace of Mind When Needed Most!

Residents & Team Members Making the Most of Hurricane Ian

From bingo parties to dancing, the focus of team members was to keep our residents happy, healthy and distracted from what was going on outside. We’re proud of the many smiling faces produced despite the extraneous circumstances!

How may I assist you today?