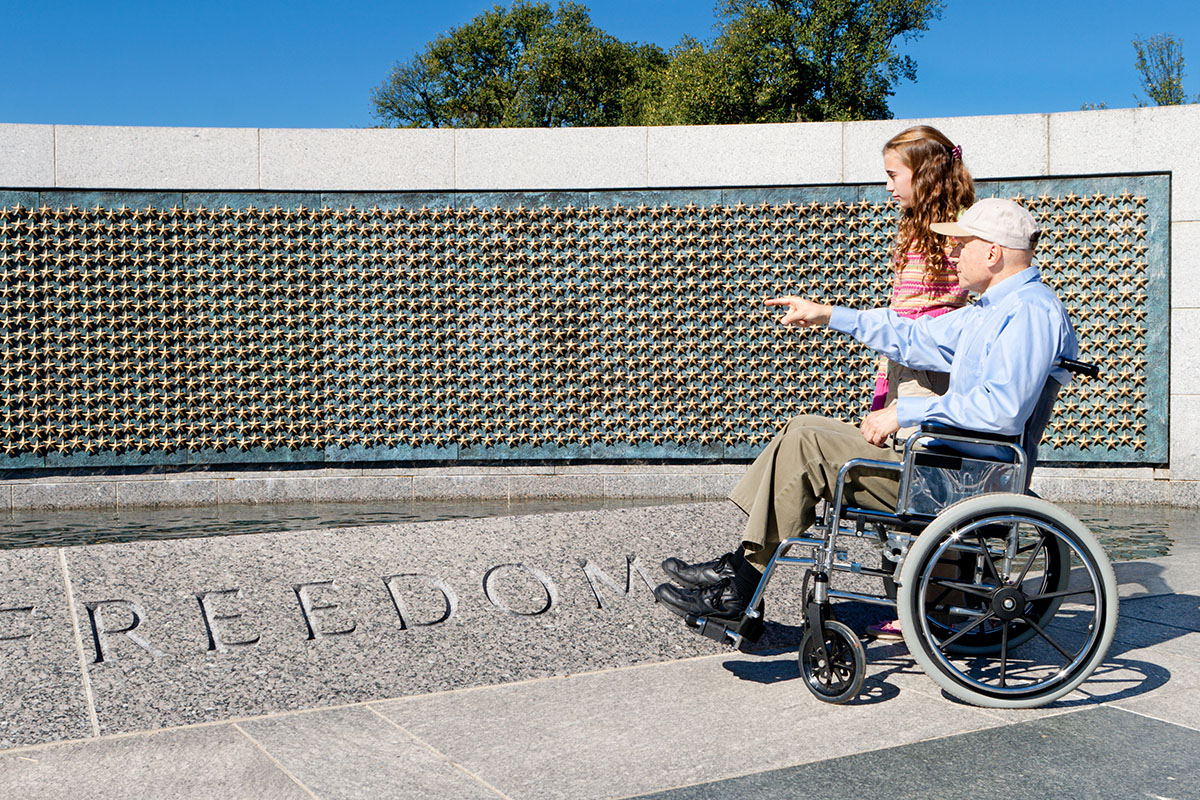 World War II veterans are a dying breed. Literally. In fact, the Department of Veterans Affairs estimates that 640 WWII vets will die every day in the U.S. But before they do, many are getting the gift of a lifetime – an Honor Flight visit to Washington D.C.’s WWII Memorial.  And Florida is taking part.

Are you a senior who experienced Word War II firsthand – either in the military or on the home front?  Maybe you’re a Baby Boomer with WWII-era parents.  Many of us have grandparents or neighbors or friends who lived through the war.  Even though it took place 70+ years ago, World War II still touches all of us.  Not because we lived through it, but because of the lasting effects it has on our world today.

The servicemen and women who served in World War II sacrificed a lot for their country and fellow man.  Times were different then.  This war defined the 20th century and patriotism was widespread.  Even those at home did their part for the war effort.  And those in the armed forces, well, they were heroes.

They were welcomed home with parties and parades – but then slowly things went back to normal.  But they weren’t forgotten — and in 1993 plans began for a monument to honor those 16 million who served, and 400,000 who died, during WWII.

Unfortunately, by the time the monument was finished in 2004, most of the veterans were in their 80s.  Many of them wanted to see the memorial, but by then, their physical health and finances made it difficult to make the trip to Washington D.C.

Earl Morse, a retired Air Force captain and physician’s assistant, realized the discrepancy between their desire and their actual ability to make the trip.  He decided to do something about it and the Honor Flight was born.  A pilot, Morse offered to fly one of his patients to Washington D.C.  His offer was received with such gratitude and emotion that he asked another veteran and got the same response.  Then he took it one step further, appealing to other pilots to do the same.  The caveat was that there would be no charge to the vet and that the pilot would accompany the veterans around for the day.

Eleven pilots volunteered the first year and the program was such a success that by 2006 it became necessary to use commercial flights to accommodate the many vets who wanted to visit their memorial.  Amazingly, nearly 100,000 veterans have now made the trip with as many as 800 of them transported courtesy of the Southwest Florida Chapter out of Bradenton.

Like all of the other chapters, the Southwest Florida group is dedicated to helping veterans realize their dream of seeing the memorial that honors them.  Maybe because there are a significant number of seniors who make their home in southwest Florida, the chapter’s website states that they pride themselves on being “an extraordinarily patriotic and caring community.”  Founded by Donald T. Vecoli and Jim Barrett, the Southwest Florida Honor Flight serves Florida veterans between Manatee and Collier counties.

The good news?  Honor Flights are 100% free to the veteran.  Everything– from airfare to lunch — is covered.  Vets wanting to buy souvenirs might want to bring cash or credit.  All others just need to bring themselves.

Funding comes primarily from private sources – people who realize how important this to our county’s WWII vets.  With most of these seniors now in their 90s, time is of the essence.  Wheelchairs are not a problem (but vets should plan to bring their own).  Many chapters throughout the country have waiting lists with seats awarded on a first-come, first-served basis.  Terminally ill vets, however, are given top priority.

And that’s exactly what they do.  Dominic Gumina of Naples was one of the 50 vets from Southwest Florida who made the one-day trip to Washington D.C. in September of 2013.  The vets who went all talked about the emotions and memories that came flooding back.  But seeing the memorial?  That was a good memory.

“It was beautiful,” said Gumina. Now I can die happy.”   He lived for almost another year – knowing that his military service was appreciated by the U.S. Government who erected the memorial, the citizens of Southwest Florida who make the Honor Flight possible — and every person who sees that memorial and remembers.

Learn about other activities and events that you can participate in when living at the Veranda Club senior living community. Contact us today at 561.332.4698 to hear about our living options, programs, and other amenities.

Four Ways You Can Customize Your Senior Lifestyle In Independent Living In Boca Raton, FL
May 1, 2022

What Are The Advantages Of Retiring In Florida?
March 28, 2022

What Matters Most When Choosing An Independent Living Community?
November 28, 2021

This site uses Akismet to reduce spam. Learn how your comment data is processed.

About Discovery Village at Veranda Club
Go to Top

How may I assist you today?